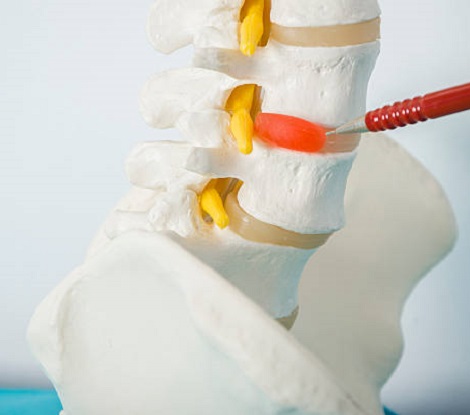 A slipped disc results when a disc protrudes, bulges or herniates. Degenerative or damaged intervertebral discs are referred to as slipped discs. Back pain coupled with sciatica is the result of spinal disc problems. Your spine contains disks that act as cushions between each vertebra. In the center is softer cartilage that surrounds an outer layer of tough cartilage. To help visualize them, think of them as small jelly doughnuts that fit perfectly between your vertebrae. A disk’s physical condition deteriorates over time. The cartilage of disks weakens as they dehydrate. It looks something like a hamburger that has grown too big for its bun when the outer layer of the disk bulges out evenly all around its circumference.

Herniated disks cause more pain than bulging disks, since they protrude farther and irritate nerves more easily. Inflammation of the nerve root can result from compression of the nerve or, in most cases, a herniation.

Difference between Herniated and Bulging Disc

A disk’s condition deteriorates with age. Dehydration and cartilage stiffening occurs when disks dehydrate over time. It looks a little like a hamburger that’s too big for its bun if the outer layer of the disk bulges out a bit evenly all the way around it due to these changes.

Bursting disks don’t always affect every square inch of its perimeter, but around one quarter, if not half, is normally affected. In this case, only the tough outer layer of cartilage is affected.

An alternative injury is a herniated disk, in which some of the softer inner cartilage protrudes out of the hard outer layer of the disk. Although the disk does not rupture or slip, herniated disks may also be called ruptured or slipped disks. The crack is only affected in a small part.

An aging-related condition referred to as disk degeneration is commonly the cause of herniated disks. Age makes your disks less flexible, making them more likely to rupture due to even the slightest stress.

Herniated disks are difficult to diagnose in most cases. Herniated disks can happen when you lift heavy objects with your back muscles rather than your leg and thigh muscles. It can also happen when you twist and turn while lifting. There are many reasons why a person falls, such as a fall or a blow to the back.

Bulging disks can happen to anyone at any age but they are more common in people who are older or participate in strenuous physical activity for long periods of time. Bulging discs should be understood and treated according to their symptoms, causes, and effects to avoid a deteriorating condition.

Surgery and medication therapy are included in its treatment. Physical therapy might be recommended by your doctor to help you with your pain. Herniated disk pain can be minimized with exercises and positions taught by physical therapists.

Pain medication over-the-counter may be prescribed if your pain is mild to moderate. Surgery is not required for most people with herniated disks. If you haven’t improved after six weeks of conservative treatments, your doctor might suggest surgery.

There is a cushion between each vertebra in the form of a disk. Within the tough outer layer of cartilage lies soft cartilage in the center. If you like to think of them as a metaphor, you can imagine them as miniature jelly doughnuts, which are the perfect size to fit between vertebrae.

As disks age, they show signs of wear and tear. As cartilage ages, it becomes dehydrated and stiff. In such cases, the disk’s circumference bulges slightly around its circumference, similar to how a hamburger would bulge if the bun were too large.

In most cases, burst disks are only noticeable on one-quarter of the disk’s circumference; however, they can affect the entire perimeter. A stratum corneum is devoid of cartilage.

In contrast, in a herniated disk, certain segments of softer inner cartilage protrude through the outer layer of crystalline cartilage. Herniated disks, which are also called ruptured disks, are not ruptured or broken. Only a small area of the crack is affected.

When a disc sheds, its roots are in more pain than when a disc bulges, because it pushes further into the spine and irritates the nerve roots. Nerve root inflammation can be caused by excessive pressure on the nerve or by nerve compression or herniation, which are much more common causes of irritation.

Even if an imaging test was performed to see if you have a herniated disk, you might not have one. In some instances, MRI can diagnose a herniated disk even if a person does not experience any back pain.

It is rarely necessary to perform surgery to repair herniated lumbar disks. These symptoms may indicate a patient requires spine surgery after they have failed to find relief from nonsurgical treatments.

In cases of bowel or bladder problems, microdiscectomy can be performed. It is most common to treat herniated disks with microdiscectomy. An incision near the herniation is commonly made under the microscope during this procedure.

The herniated disk part is removed along with an additional fragment that presses on the spinal nerve.

A more intensive surgical procedure may be required in cases of more than one level of disk herniation.

Rehabilitation. You may also be recommended exercises that will help you recover strength in your back and legs, in addition to a simple walking program (such as 30 minutes daily).

After your surgery, you should avoid bending, lifting, and twisting to reduce the risk of additional herniation.

It is possible for the disk to herniate again although it is unlikely with surgical and nonsurgical treatment.

Nonsurgical treatment can result in long recovery times. Patients who wait too long to undergo surgery may experience less pain reduction and improved function compared to those who have surgery sooner. A physician will advise you regarding the best approach before surgery.

An operation carries a lot of risks. The risk of a surgical procedure varies from procedure to procedure. Anesthesia-related complications, blood loss, and infections are examples.

A herniated disk can result in the following complications:

Surgery produces excellent results in general. Typically, symptoms in the legs improve faster than those in the back. A period of recuperation usually follows surgery before patients can return to their regular activities. When pain is relieved, muscles are strengthened, the sensation is improved, and then overall strength improves.

The treatment of disk herniation has been extensively researched for many years. Your doctor can help you decide whether nonsurgical or surgical treatments are best for you.