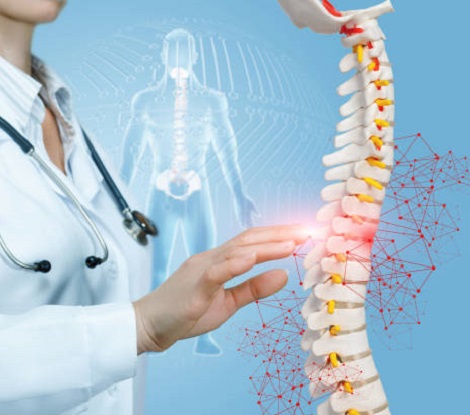 Three minimally invasive procedures for the treatment of herniated discs result in similar results: lumbar discectomy, microdiscectomy, and percutaneous discectomy. Pain that radiates to the arms or legs can be treated effectively with these procedures.

Between the vertebrae of the spine are discs, which are round cushions. A range of motion is possible because the vertebrae do not rub against each other.

An out-of-place disc can rupture (herniate) and push on nearby nerves, resulting in pain, numbness, and weakness in the back, legs, and arms.

Rest, pain relievers, and physical therapy are the three most common forms of pain management for herniated discs. If symptoms persist, a minimally invasive surgery can be considered if non-surgical treatment does not work. The majority of people with neck and back pain do not require surgery.

Patients with a herniated disc could undergo a minimally invasive procedure, but for the following reasons this procedure is likely not right:

Several minimally invasive procedures can be used to relieve the nerve pain caused by pressure. “Discectomy” refers to removing hurting discs or protruding herniated discs from the spinal column. When this is done, the nerve is relieved of its pressure.

Herniated discs that cause radiating pain can be relieved with minimally invasive options such as microdiscectomy and percutaneous discectomy.

An outpatient procedure to remove a disk from the lower vertebral column is known as lumbar discectomy. In particular, it is effective in treating leg pain (sciatica).

For many years, sciatica was treated through open surgery (large incisions). Decompression may also be performed to relieve pressure on adjacent nerve roots by removing part of the intervertebral disc.

Disc decompression techniques have advanced, and the procedure is now performed under a microscope, or by using an x-ray machine to visualize the disc while using small incisions.

A microdiscectomy (also called a microdecompression) is done through a very small incision in the skin. This damaged disc is viewed and removed through a thin tube that has a camera on one end. A small incision of about an inch in length minimizes tissue damage. By separating the muscles and ligaments instead of cutting them to reach the disc, minimally invasive surgery minimizes the risk of postoperative pain.

There is generally a greater benefit in microdiscectomy for relieving leg pain (also called radiculopathy, sciatica, etc.) than lower back pain.

In most cases, leg pain is relieved almost immediately following a microdiscectomy. Many patients report significant pain relief after the operation.

There may be weeks or months required to fully heal the nerve root and get rid of any numbness or weakness that may occur in the leg and foot.

For sciatica caused by herniated discs in the lumbar region, microdiscectomy is generally considered a safe and effective minimally invasive procedure.

During a microdiscectomy, the disc material putting pressure on the nerves is removed, and the following procedures are typically performed:

Similar to a microdiscectomy, percutaneous discectomy involves removing the disc through the skin.

The procedure involves inserting a small endoscopic tube between the vertebrae and into the middle of the disc through a very small cut in the skin. Images of the disc are used for guidance. Endoscopes have a camera that allows the surgeon to see inside the body. These devices are inserted through tubes or series of tubes, and then the tools are removed.

A patient who suffers from pain caused by a herniated disc that is in a contained state (so there is no rupture of the disc outer wall) may benefit most from this procedure.

Discectomy can be a helpful procedure for people living with back and leg pain, including those suffering from sciatica and radiculopathy. When a patient has a small, contained herniation, a percutaneous discectomy may be an appropriate treatment. Patients with large, contained (non ruptured disc) herniations may also be candidates for this procedure if open surgery is not appropriate.

When is a Microdiscectomy Used to Treat Back Pain?

A microdiscectomy may be required for someone who has tingling in the legs and back due to a herniated disc in the lower back. The two most common reasons for microdiscectomy are:

If the intervertebral disc has broken away, a fragment may press against the spinal cord or spinal nerves.

Even though the disc may still be intact, there may be a part of it that bulges and places pressure on the nerves or spinal cord.

People suffering from back pain associated with herniated discs can find relief from their symptoms and pain after undergoing microdiscectomy surgery. Not everyone, however, benefits from this treatment. Occasionally, the procedure may not reduce the amount of pain, or the pain may be temporarily relieved, but it will come back. Herniation of the disc occurs again in about 5% of cases.