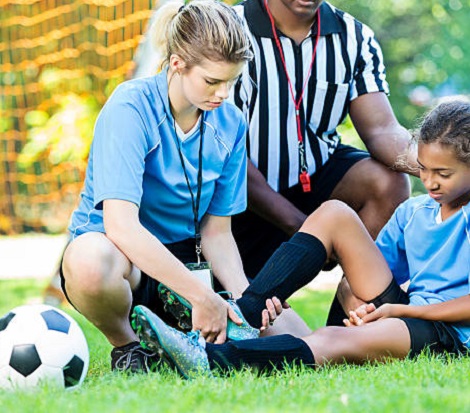 It is nearly impossible to escape from severe bruises when you are addicted to sports or perform athletic training immensely. These severe injuries cause massive pain and decrease your strength to the point where it makes an unhealthy effect on your daily fitness.

Our vast experience has helped a lot of patients to recover from their painful injuries, restore that energy and get healthily back to their daily fitness plan. When a body suffers with a sports injury during a game or training, the soft tissues tend to experience vast damage and suffering. The most widely recognized wounds brought about by sports exercises are dislocations, strains, impact injuries, severe sprains, and even fractures. To get back on the ground quickly, reserve an appointment with our services and get over with that injury pulling you back from sports.

Sports Injuries and its Causes

Sprains and strains do sound similar but they have a big difference among them. Strains tend to harm the muscles or tendons which are the fibrous tissues that keep the muscles attached to the bones in a body whereas sprains bring immense harm to ligaments which are the bands of tough tissues that support and connect bone to bone tightly.

When the muscle, ligaments, or tendon get overextended far from its elastic capacity, strains and sprains take place. This happens to be acute injuries, for instance, when you over exceed and the light or soft tissue extends and ends up breaking, or because of a constant strain to tissues from rehashed action.

The warning signs that sprain and strain injuries shows are similar to those shown by dislocations and fractures. It is extremely mandatory to get your injuries checked and treated as soon after their occurrence.

Whether you are suffering from a chronic or acute sports injury, the symptoms can change on the basis of the nature of the injury. The most common spotted symptoms of acute injuries are swelling on the injured area, experiencing pain while moving hands or arms, discoloration, a paroxysm of pain, weakness, displacement of joints or bones, etc.

Whereas the most common symptoms of chronic injuries are experiencing pain when performing sports activities, discoloration of the skin, swelling, dull pain during breaks, etc.

Some injuries are preventable and can be left unattended, however, some Injuries caused by sports cannot be easily prevented mostly when you are involved in a competition.

A proper warm-up before a game is extremely mandatory to let those muscles loosen up. Following good training, wearing the right gear, and not being too hard on yourself can be beneficial.

After encountering a sport’s injury one should quickly go for the ‘RICE’ protocol i.e., rest, ice, compression, and elevation. After you are properly diagnosed, our team will suggest one or some of the following methods:

There is a difference between an acute and chronic sports injury. As the name implies, acute injuries are those that happen suddenly, like when you sprain your ankle from an awkward landing. Chronic injuries result from overusing muscles or joints. The technique and structural abnormalities that cause chronic injuries are also factors. Medical attention is essential for athletes who have sustained any type of injury, as they may be more seriously injured than they realize. The appearance of a sprained ankle may be deceptive, even though it is actually broken.

Types of sports injury include the following.

In contrast to ligaments, which form attachments between bone tissues, ligaments are fibrous and slightly stretchy tissues. Stabilizing the joint is the function of cartilage in preserving bone alignment. We are concerned about injuries. They also determine how far a joint can move. In addition to preventing backward bends of your elbows, they enable you to perform complex coordinated movements while participating in sports.

The cartilage is mainly composed of collagen. It is the collagen fibers that are responsible for the tensile strength of the ligament.

A ligament also causes the brain to receive sensory information that helps people visualize the position of their joints without looking at them.

It takes a lot of force to damage a ligament. When your foot catches on the ground or your entire body weighs on one joint in a collision sport like football, this can be easily done by another player or by your opponent. A ligament sprain occurs when structural damage is done to the joint capsule and ligaments.

An injury sustained while playing sports or exercising is commonly referred to as a sports injury. A sports injury can occur due to an accident, using the wrong equipment, being unconditioned, or failing to warm up and stretch properly. Almost any part of the body can sustain an injury while participating in sports or exercising, but most frequent injuries to the musculoskeletal system, which contains the muscles, bone, ligament, and tendon.

Most sports injuries, particularly those caused by adaptation processes or poor stability, can be effectively treated, and most people can once again partake in physical activity as they did before the injury. By taking appropriate precautions, you can avoid a great deal of sports injuries.